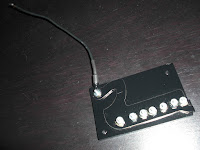 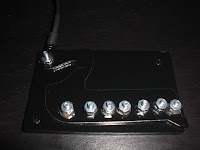 I made a simple terminal block for connection to my Voice Box's random DTMF tone generator. The tone generator needs a simple ground pulse from any momentary button that I want to generate a tone which means lots of connections so I whipped this up. I had a piece of fairly thick brass from some electronics scrap I had kicking around. I drilled in some holes and screwed it onto a piece of Lexan plastic to serve as a mounting bed that I can then later screw onto the stock OEM plastic dash under my Knight Rider dash. Using my relay boards I can already get a fair amount of connections through just one wire so this gives me more to eventually connect to should I ever need too. 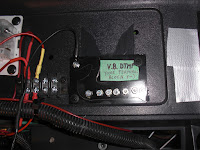 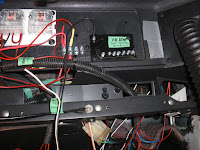 I installed the terminal block under the stock OEM dash for the DTMF V.B. tone generator as you can see in these two pictures here (right & left). I have the entire block connected to a connector that connects to the other end of the plug under the Knight Rider dash. This should give me lots of connections for any buttons I want to generate a tone using the Voice Box's built in DTMF tone generator. 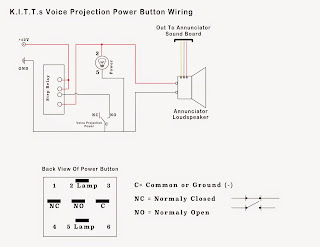 I just realized that I can wire up my Voice Projection Unit's power button to my V.B. Random DTMF tone generator as it's a ground connection button that goes to a Step Relay mounted in under my OEM dash (Top left image, Step Relay on the far left). All I need to do is tap into the black wire just before it goes into the Step Relay and attach it to my DTMF terminal block, that should give me a random tone generated through the V.B. when the system is switched on and off. Something to experiment with today for sure. ;)

Don't do it Michael!

Well apparently the V.B. did not like that plan very well and I think I fried the V.B's Random tone request option because now the V.B. only plays the tones during the start up sequence. The tones work for the buttons in the PANP group but the input for random DTMF request is "Bitched!" :( Either is going to need a new chip or a new V.B.

So I contacted the fine folks at Ideegeniali who make the Knight Rider Voice Boxes, as it turns out it's just the I.C. 1 chip that I ended up burning out the digital inputs. Fortunately it's only going to cost me 10 Euros to replace the chip..... ah this is the kind of thing that happens when you are inexperienced like me with electronics, I'm just surprised it hasn't happened sooner with all of my crazy experimenting. ;) 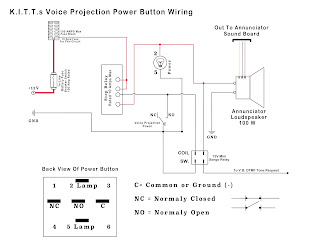 This Will Do The Trick 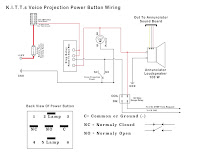 After some experimentation and some very expert advice from Paolo of Ideegeniali this new wiring scenario (left), for isolating the Voice Box's DTMF tone request seems to work very well as the small Songo Relay simply connects the Voice Box ground (-) to the DTMF tone request through it's internal switch. This makes for a very well isolated circuit so there is no chance of me accidentally overloading the I.C. 1 chip anymore. 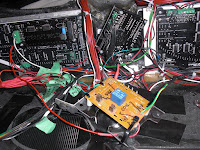 Here you can see how I have added the small blue 12V Songo Relay onto the back of a piece of circuit board I had kicking around (right), it's a bit big I know but I needed to mount the tiny contacts of the relay onto something as they were too small for my Alligator clip test leads to grip onto. I may swap it out for a much smaller piece of PCB board later on depending on how much space it takes up under my dash otherwise "If It ain't broke, don't fix it." We'll see ;)

I have tested out my Tone requests from my buttons and relay board and they send the needed ground pulse to activate the coil in this mini Relay so that is perfect and just what we want. :)

Posted by KnightRiderGuy at 11:00 AM