Posted by KnightRiderGuy at 6:43 PM No comments: 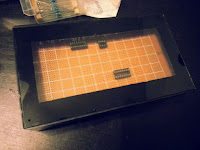 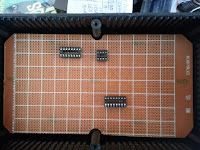 I started work on KITT's CPU box and top effects circuit board. So far I've cut out the piece of proto-board I will be using to make the top effects circuit out of. Here you can see (left) I have just positioned the IC Chip cradles roughly in place so as to begin to get an idea of how I want to lay out the effects circuit to closely match the one seen in the show. I have also made the transparent cover plate using some Lexan plastic (top right) and also again positioned the circuit board roughly in place to get an idea of how this project will look. 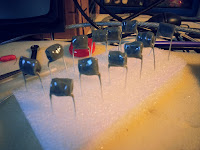 For one of the next steps I have chosen to make some fake capacitors (left) that will look similar to the large red ones seen in the original. Basically they will just be jumpers to help with the layout of the circuit and more for aesthetics than any real function, other than just being current jumpers really. This is just the first stage of creating them, they still need another coating of 5 minute Epoxy and then to be smoothed out and finally dipped into some red paint. I'll post more when that stage is complete. Then I'll be able to finally start soldering my components onto the circuit board.

I was not too crazy about the way those jumpers turned out so I began making some different ones that are shopping up to look way better than the ones pictured above. After much testing I've begun to arrange my components onto the Proto-board. So far so good, I should be able to start soldering soon. 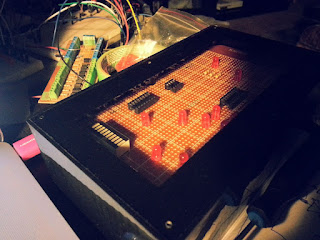 The prototype board is not pretty, but it's works. We'll get proper PCB boards printed for the final version but all soldered together it's working and that's the main thing at this stage of the project.

Posted by KnightRiderGuy at 6:22 PM No comments:

Posted by KnightRiderGuy at 9:26 AM No comments:

Posted by KnightRiderGuy at 6:58 PM No comments: