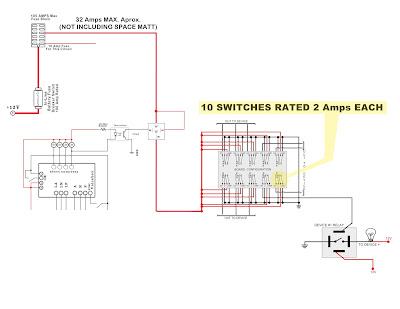 OK, here is a solution to something that has been kind of on my mind for a little while now....
So the Lower Console's button and switch lights are on all the time currently even if the ignition is off.... not good I know, bad, bad, bad... as these are not LED lights in this buttons and switches and given enough time would drain the battery for sure. So last night I had a thought pop into my head as I learn more and more about what many of the electronics components are capable of... my idea was this:

"Why not run a small 22 AWG wire from the last top countdown indicator on the top of the dash and run that to the base of a Transistor to activate a Relay that would turn on my Lower Console Switch and buttons lights?

That way when the dash did it's startup sequence, upon the lighting of the very last indicator a signal could be sent to activate my Lower Console lights."

Very simple I thought, so I got into a great conversation with Andrea lannaccone on Face Book this morning and we hashed out this wiring scheme. NOT using a Transistor as I had originally imagined but instead using an Optocoupler. Hey whatever works and is simple I always say ;)

You can see in the middle section of our diagram how we have introduced the wiring of the last countdown indicator LED to the Optocoupler which in turn triggers the SPST Relay which sends power to the Lower Console's switch lights making it an interactive part of the Dash start up sequence.... should be pretty cool when wired up and tested out ;)

Posted by KnightRiderGuy at 8:41 AM